Khaled and Lailuma and the many European volunteers

Khaled and Lailuma are the embroidery project’s two representatives in Afghanistan. Three times per quarter they drive to the villages to:
 pay the embroiderers,
 present the evaluations written in Freiburg,
 collect the newly finished embroidery,
 distribute the new material.
Khaled was born in one of these villages and lived there until the war began. During the 20 years of war he – like all families from villages in this region – was continually fleeing between Kabul and the Panjshir Valley. Since the end of the war he and his family have lived in Kabul.
A very friendly person, he has won the trust of the villagers. Thanks to him, the doors to the houses and courtyards are open to the project – not a matter of course in Afghanistan. He is employed by the DAI to manage all its projects in the Shomali plain area. (You can find more about this on the website of the DAI.) When we fly to Kabul, we enjoy the hospitality of his family, the Hashimi family.
Lailuma lived for 18 years in Germany before she decided to return to Afghanistan. She speaks German and translates for me when I’m there. She lives with her brother’s family in Kabul.
In 2011 Sarah accompanied me on my trip to Afghanistan. You can find her in the 2011 travel report, in words and photos. In 2012 Sabine went with me. You can find her too among the photos. She wrote the travel report for 2012. In 2013 Margreth came along to Kabul, with special assignments that you will discover in the 7th joint travel report.
Hearty thanks are due to the board members of the DAI, who have supported the embroidery project for many years. In particular, the large business component has demanded a lot of work from Treasurer Wilhelm Druben. Despite his time-consuming duties, he has never lost his enthusiasm for the embroiderers and their work.
Through the years a faithful team of volunteers has grown up, mostly women from the Freiburg area, who work together very efficiently. There is so much to do! The tasks are very diverse, ranging from correcting and translating texts to graphic design, organizing exhibits and much more. Once a quarter, when the new embroidery arrives in Freiburg, it must be “processed”. It takes about two weeks for the embroidery to be ironed, cut into units and packaged for sale – as well as organizing the material for the next consignment.
Increasingly, individuals working alone or in teams are taking over bigger projects, such as running a sales stand and often an associated exhibit at a crafts fair. I have discovered that I don’t have to be everywhere (not possible in any case!), and I have great confidence in these people. It has always worked beautifully! Thank you for the exceptional support!
Every public appearance of the embroidery project is important for its long-term success and the financial underpinning of our project.
A big THANK YOU to all the people I can count on, in Freiburg and throughout Europe! 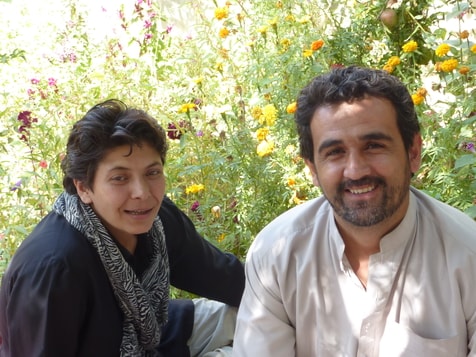