The embroidery project in Laghmani, Afghanistan, was ten years old in 2014. The development of the hand embroidery during this time has been impressive. The embroiderers have regained their skills – they play with colors and give free rein to their imagination. They develop their own designs; each piece is unique. Their technique has improved remarkably during the years; it is astonishingly difficult to distinguish between the front and reverse sides of the embroidery!

As founder and manager of the embroidery project of the DAI, I must always come up with new ideas. In 2011 I asked the Afghan women to produce embroidery based on leaf shapes and motives. For this purpose, fabric and embroidery floss in different shades of green were distributed. The area of each leaf was to correspond to the standard size of the usual embroidered squares (a scant 70 cm2). In addition, they were to take care to fashion smoothly embroidered edges, to make it possible later in Europe to cut out the leaves directly on the embroidered edge, and thus use them in 3D applications.

The time came when these unusual embroidered leaves became the catalyst for an innovative project: in September 2013 the competition “Forest for Ever” was announced. The leaves were to be used as the basis for new works. A second condition was that works should be vertical, with a 1 to 4 width / length ratio (minimum height 40 cm, maximum height 2 meters). All forms of textile art were permitted, including the incorporation of foreign materials.

The jury was comprised of Anne Marie Bertrand (FR), Geneviève Attinger (FR), Judith Mundwiler (CH), Gabi Mett (DE) and Elsbeth Nusser-Lampe (DE), all of whom are well known and professionally active in the textile scene. Of the 158 submissions from throughout Europe, 60 works were selected. The selection criteria were the usual ones: relevance to the theme, composition, technical excellence and originality.

The long-awaited results compellingly demonstrate the collaboration between Afghan and European women. The diversity of the works is especially impressive: although the theme of the forest is certainly always present, there are no similar, let alone identical, interpretations of this theme. From light, transparent works displayed hanging freely in space, through heavy, practically realistic works reminiscent of tree trunks, the visitor can wander through the exhibition as through a utopian forest and marvel at the many interpretations of the theme “Forest for Ever”.

As usual in the textile scene, the emphasis is more on aesthetics than on social and global political criticism. Still, although this critical approach is seldom expressed explicitly, the works remind us implicitly how crucial the condition of the forests is world-wide.

In Afghanistan there are very few forests. To return to hard reality, this deficit is a daily problem for the embroiderers, who must prepare a warm meal three times a day.

You can still order embroidered leaves originally produced for the competition, throughout the travelling exhibition. They provide a welcome change to the usual embroidered squares. 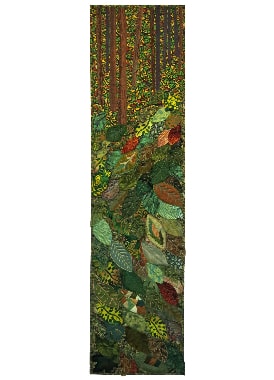 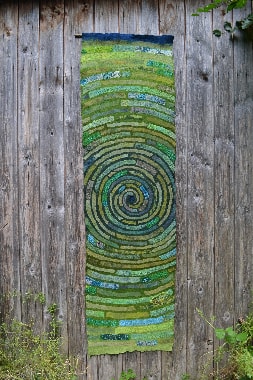 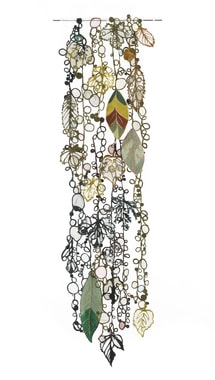