Afghan women love flowers. They all cultivate gardens in their yards, planting lots of flowers. Gudrun Seng’s small three-part patchwork – hand embroidery from Afganistan combined with hand embroidery from Germany – offers a nice occasion to report on our project “flower seeds as gifts for Afghan women”: Into her embroidery, Gudrun has worked mallow seed capsules. During the weeks before my fourth journey in summer 2009, I informed everyone interested in the project, announcing that I considered to give away western flower seeds. There were amazing reactions! I was sent some 5 kg of seeds, all in small bags. Each of the embroiderers could pick one of these and they liked that very much. Afterwards, they gave me many beautiful bouquets from their own gardens. (Pictures can be found in the fourth journey report.)

Monika Sebert-Müller’s quilt “Hello Shafiga”, which represents a flowerbed, is an opportunity to deal with a question I am frequently asked in Europe: Is poppy cultivated in Laghmani? No, I have never seen poppy fields between Kabul and Laghmani, in the Shomali plains. As far as I know, only one embroiderer’s husband is an opium addict. They mainly cultivate cereals (wheat, rye, maize), potatoes and vegetables (onions, zucchini, pumpkins, tomatoes, peppers, aubergines), as well as fruit, such as raisins that have been allowed for export to Europe recently.

A traditional suzani and flower fields from Jila, delivered in 2008 and 2011.

In 2007, I asked Jila to embroider an industrially printed fabric (kitchen stores from the 70’s). I suggested for her to do an embroidery of a flower field on it and sketched out six flower patterns that she arranged all over the entire piece. It arrived in 2008.

I usually hand out so-called “extra” tasks to special embroiderers. In this case, I chose Jila because I knew she was unmarried and had more time than others. Such extra tasks are highly popular because they are an additional source of income. The embroiderers can do their regular number of squares and work on these extras in their remaining time. The important thing is to keep up the quality.

Then there was a surprise: In the first batch in 2011 a second extra piece from Jila arrived. After such a long time, I had forgotten that I had given her another piece of cloth to work on completely according to her own ideas. This time she had not used klosterstich as in her first piece, but had made rosettes in satin stitch, the Kandahar embroidery technique used for the decoration of the full-body veil. This piece has been initiated and produced solely by Jila.

These, partially or completely embroidered cloths, are done in the tradition of suzanis, the embroidered blankets from Uzbekistan. Actually, in French, klosterstich is called Bokhara stitch from the town of Bokhara in Uzbekistan. Together, the women in a family worked on the production of up to twelve embroidered blankets, suzanis, for weddings; those had to be finished in time to be displayed and admired. They were mainly used as wall decoration or to wrap precious objects.

This piece is made of cut up bed sheets. Bed sheets for embroidering are collected in Germany; however, parts must be removed as the double-layered fabric cannot be embroidered and also means unnecessary weight. While I was in Afghanistan in the summer of 2009, my friends in Freiburg dyed fabrics. Each dyed several of those residual strips in various shades of green, from which I designed this piece, similar to a carpet. I also added numerous buttons, thinking of Afghan women, who like those a lot.

During my stay in spring 2006 I did not have enough cloth for all the women who suddenly wanted to take part in the project. Therefore, we looked for fabrics that would suit European standards in the bazaars of Tsharikar (capital of Parwan province) and Kabul. The “best” fabric I could find is the one used for the typical Afghan men’s clothing, the shalwar kamiz, which consists of two parts, a knee-length tunic and trousers that are very baggy in the waistline.

This piece (the fabric was bought in Afghanistan) from Latifa is particularly interesting as, like a comic, it tells us a story.

Unfortunately, for the project (as it causes additional transport costs) as well as for the Afghan economy, this fabric cannot be found in pure cotton any longer. The cotton production disappeared during the war, although in former times Afghanistan, due to the high altitude, produced cotton of exceptionally good quality. Cotton is planted near Gulbahar and is used to pad the mats, toshaks, which are used for sitting and sleeping.

Frances Fry and Claudia Zabel used such embroideries with cotton capsules or flower motifs in their work.

The Tulips of Aghan Women, quilt from Elke Richter.

The Sultans’ tulips: The home of the wild tulip is Central Asia, mainly Persia, Afghanistan and Turkestan (Caucasus). Their appearance is similar to the pointed headdress people in Asia used to wear. In Turkish it was called tülbent, and in Persian, dulband. This is where the botanical name Tulipan comes from.

“Beside the road, there are children selling chains of pink tulips. In spring, cherry, apricot, almond and peach blossoms vie for the traveller’s attention. One huge cloud of flowers accompanies the traveller all the way to Kabul.” (From a leaflet of the Afghan Tourist Office, 1967)

“Over the death traps in the ditches innumerable short-stemmed deep pink tulips grow. But these flowers can only be regarded from a sufficient distance. If you try to pick them, an arm or leg will most likely be torn off you.” (From: Asne Seierstad: “The Librarian from Kabul”)

“Come, let us go to Mazar

Looking at the fields of tulips,

(From an Afghan song)

Maleha’s Tapestries, from spring and fall, 2011.

Maleha, who has done this “extra” piece, is a young unmarried women. She is an excellent embroiderer. Her speciality are flowers which she usually does in a delicate, high-contrast chain stitch. I had given this special task to her so that she could earn more money, as she is the only breadwinner at home. Her father, who was a diabetic and had a leg amputated, died shortly afterwards. Except for her, nobody is embroidering in the family.

This situation also appears in another family. In both of them, the young girls provide the financial basis for their families. Thus, something is happening that can really be considered a revolution: The mothers take up the housework which has normally to be done by the daughters! In Afghanistan it is usual for a mother to gradually delegate housework to her adolescent daughters; in this way the mother is relieved of everyday chores and responsibilities, which, however, can result in extreme stress for the daughters, while the mother is just sitting around idly. This “strategy” teaches daughters to be efficient housewives, in order to be well prepared for marriage. Soon, the only tasks for the mother are welcoming and entertaining guests and make wedding arrangements.

I gave Maleha two large industrially printed pieces of cloth, as well as a carefully selected range of threads. The flowers were white, as can be seen in the margin. She did not quite stick to that and completed the range of colours with lemon yellow and almond green, combining her personal taste with her cultural traditions. It is noteworthy to see the precision and symmetry in the distribution of colours.

Bilqis has developed her own personal style, defined by a balance of Kandaharidusi and Pokhtadusi embroidery techniques.

The combination of figurative motifs (flowers), embedded in repetitive borders, is convincing. During my visit in summer 2011, I encouraged her to continue working in that manner and to merge these two techniques in one single square. The resulting piece was given to Francoise Marchadier, a French artist and cross stitch expert, who, also works very individually. She has succeeded excellently in accentuating Bilquis’ embroideries. 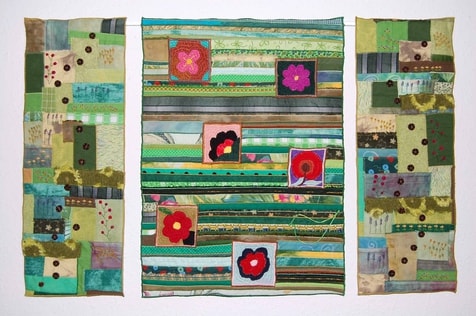 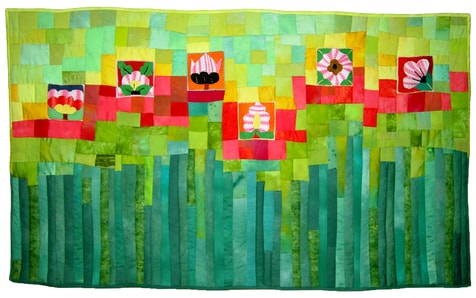 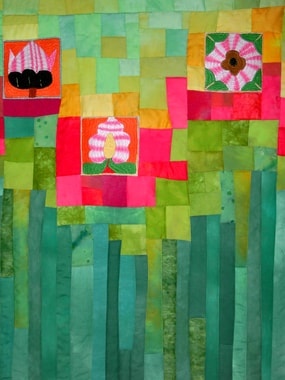 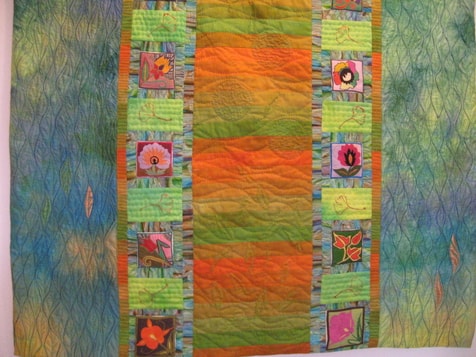 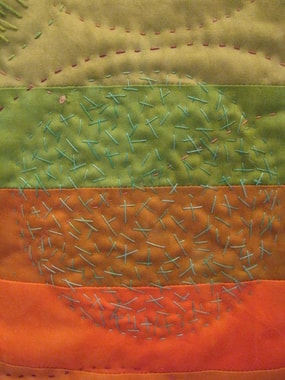 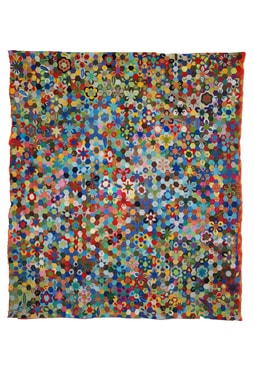 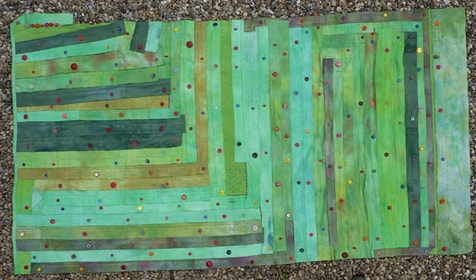 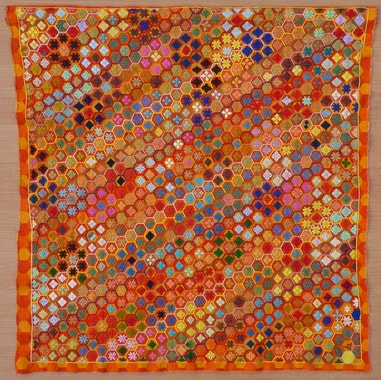 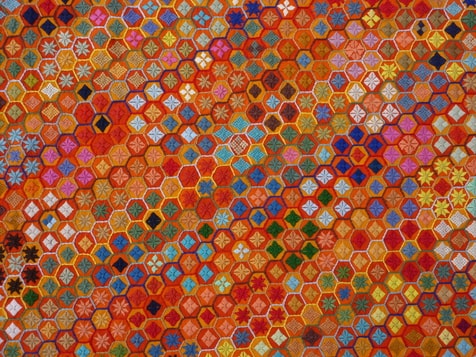 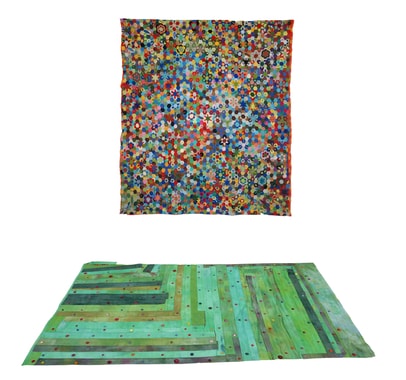 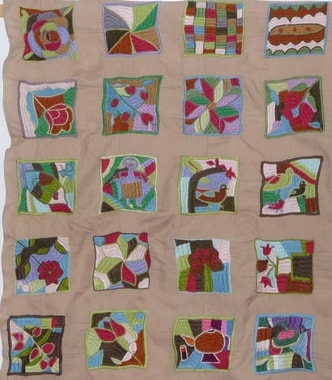 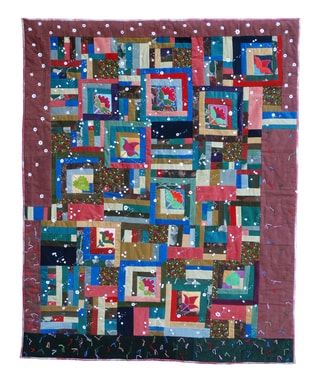 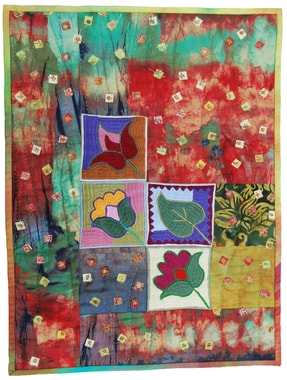 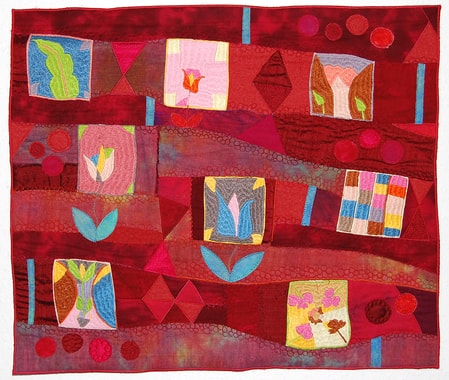 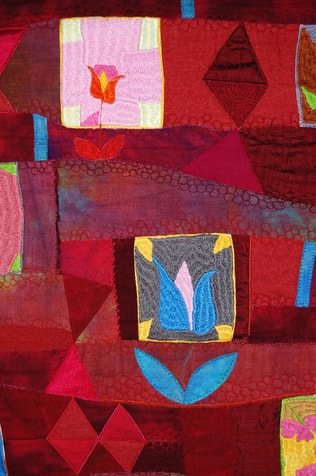 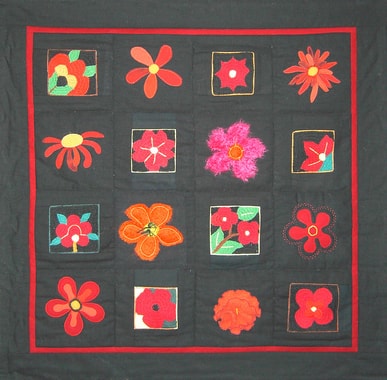 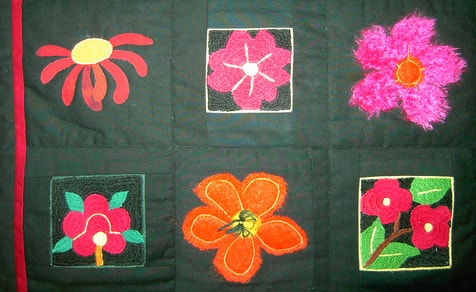 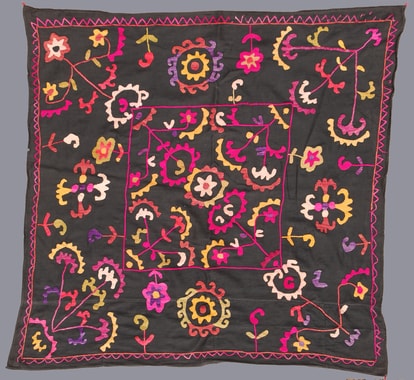 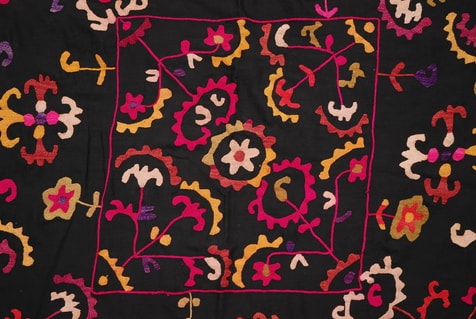 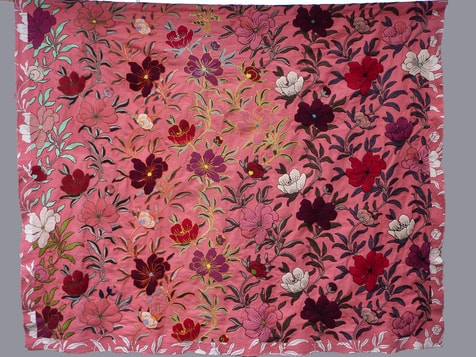 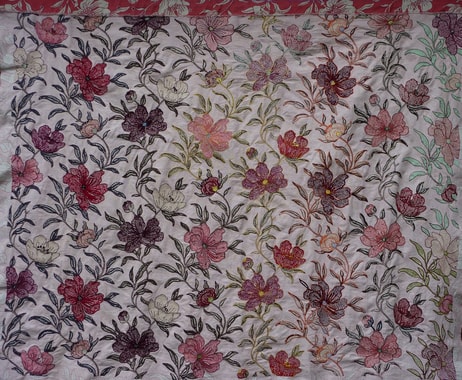 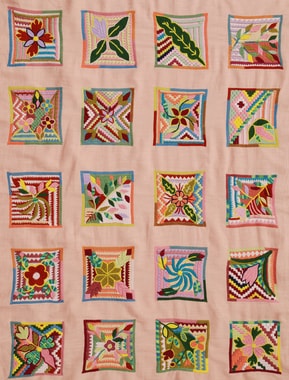 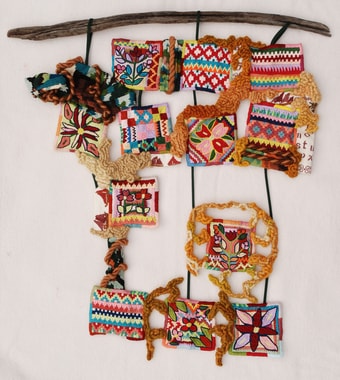 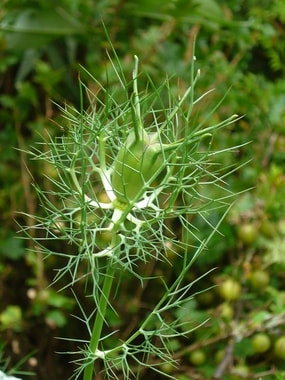 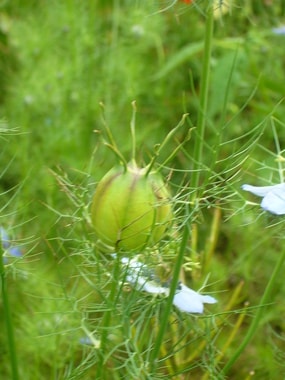 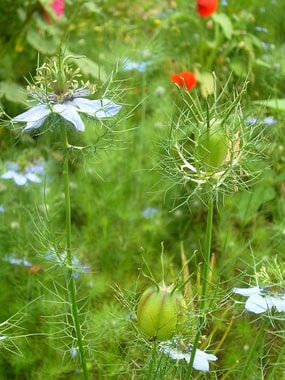 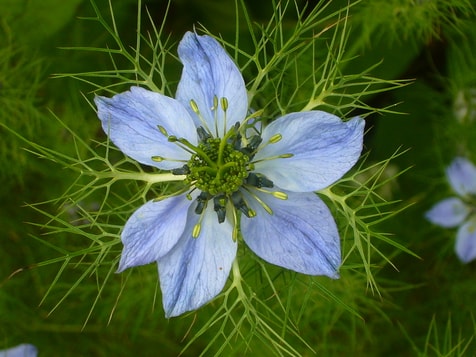 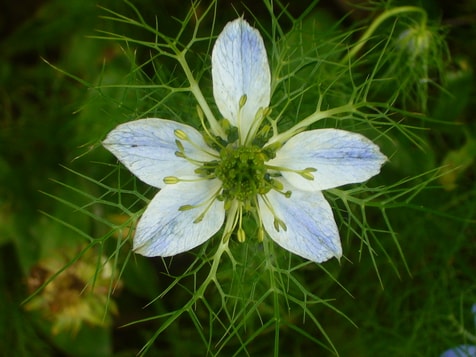 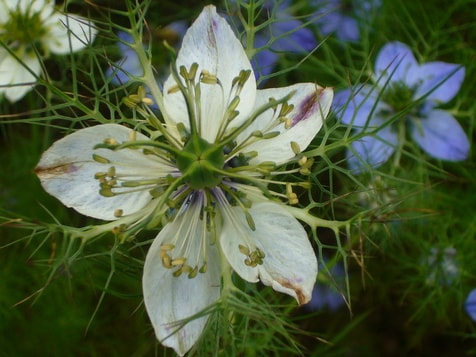 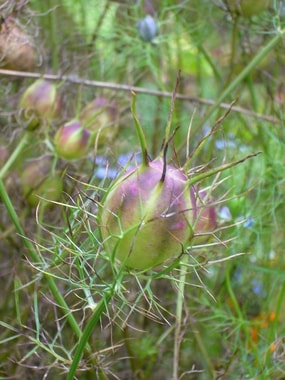